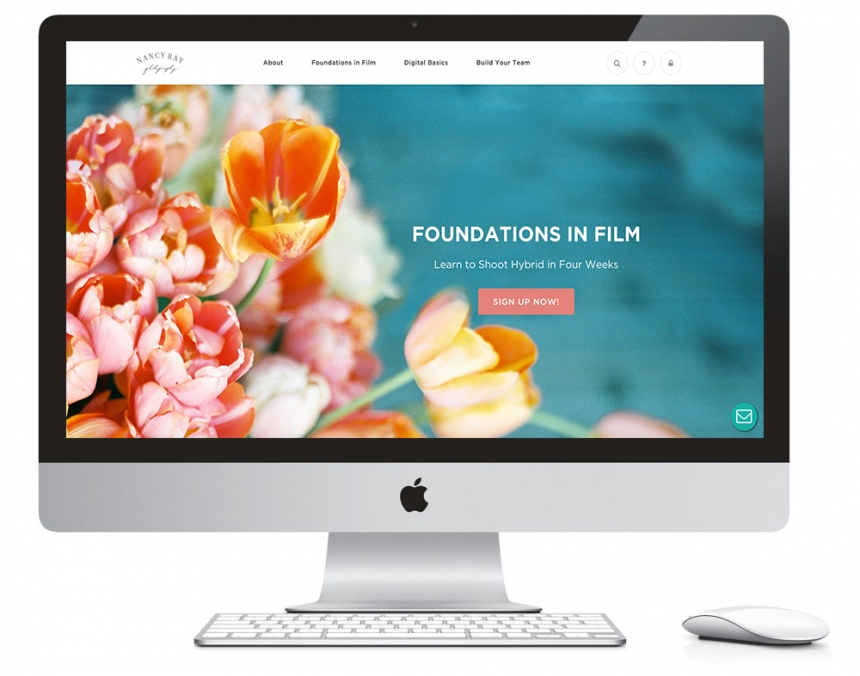 Y’all! I am grinning from ear-to-ear over here!! I’m finally taking a huge step forward to transform my craft, my passion, and my business. I’m starting the journey of learning how to shoot in film.

Film photography has always been something that I’ve been fascinated about… I’ve always wanted to learn but have had too many obstacles in my way to overcome them… until now. Something about the old-fashioned look of holding a film camera in your hands, the process of inserting and rolling your own film, the sound of a film camera when you click the shutter, the anxiousness as you drop off your film to ship to a lab and be processed, the anticipation of waiting for your film scans to arrive in your inbox, the creamy bokeh amazingness that results in a film photograph… I wanted IN!

When I started my photography business roughly 5 years ago… I knew in order to be successful that I needed to stand out from the ever-growing Google list of photographers in my area. Just being myself was key. I’m a Nikon shooter. Almost two years ago, I decided to niche down in order to truly grow in my craft and specialize in motherhood photography (maternity, newborns, and families). I am passionate about capturing the art of being a mother. That transition separated myself in the surrounding Richmond photography market because not many strictly focus on motherhood. Next, I knew that my work had to stand out… capturing those quiet, authentic, meaningful moments are what set my heart on fire.

Over the years, I have invested in many educational webinars, courses, one-on-one mentoring, workshops, workbooks, etc., etc., etc. I wouldn’t be where I am today in my business if it weren’t for many well-known, established photographers that educated and inspired me to continue chasing this dream of mine. There is always something new to learn and get better at. This past April, I hopped on a plane and attended the Fount Collective Workshop. You can click here to view a recap of the experience (and see some of my featured work!!). I came home with a notebook full of notes and action items. I knew going into this workshop experience that I would come home wanting to learn more about how to shoot in film… and yep… I was right!

Well, the timing to finally run with the idea of shooting in film couldn’t have been more perfect. Nancy Ray, film photographer based in Raleigh, NC, hosted a webinar last week about the “3 Keys to Learning Film and Transforming Your Business”. I learned some great tips to get started and soaked it all in! At the end of the webinar Nancy announced the launch of a 4-week educational course focusing on the Foundations in Film.

Nancy was speaking straight to my heart when she was explaining similar obstacles that she faced when wanting to transition to film… #1) I don’t know where to start. #2) I’m comfortable with digital and I’m a little afraid to use a film camera. #3) Film is only available to experienced, ‘Fine Art’ photographers. #4) I could never afford shooting in film… but the truth is… I needed to think long term regarding the goals, hopes, and dreams for my business. Film is available to anyone who wants to learn it. Sure, film photography is not going to be something that I master overnight… It’s going to take time and lots of practice to curate my style.

Don’t get me wrong… I still love the versatility and crisp, rich images that come from my digital gear. Over the years, I have invested in quite a suite of high-quality Nikon glass and they produce beautiful images. As a photographer, it’s important to understand the strengths of both digital and film, as well as, the different “looks” of imagery produced. With film, the colors are more vibrant and true to life… the color, the look, the life in the images of film is just overall different than what a digital camera could produce. With that said, I don’t plan to start shooting 100% in film as of right now… I plan to incorporate film into my shooting strategy and be more of a hybrid shooting with both digital and film.

Throughout the webinar last week, Nancy brought to light many of the reasons why I love film photography… Film truly sets your work apart as a strategic differentiator — as a film photographer, you are immediately going to stand out in the industry. Shooting in film offers a timeless, classic look where the overall quality of the images is superior and will make for the most meaningful keepsakes. The true, realistic color and organic artistic process of film photography is what makes the resulting images look and feel different. Film establishes credibility (through more features in magazines and blogs!). Film saves you time in editing (the lab does the work for you!). Film makes you more profitable (you can charge more when shooting film). And lastly, film makes you a better photographer because it forces you to be intentional. This final point is so very true!! With digital photography, you can snap away and get “trigger happy” during a portraiture session which leads to culling through what could easily be hundreds of images to find that one “keeper” shot… with film, you only get 16 images per roll of film… film makes you slow down, focus on your craft, and nail the shot! Film teaches you to take your time… assess the lighting… set your meter and your camera beforehand, and think hard about your composition before clicking the shutter. This is turn makes film photographers more efficient so they’re not wasting film and challenges one as an artist and making the most of those 16 images per roll of film.

SO! This morning I took a leap of faith and invested in the Foundations In Film course! I will have lifetime access to this educational content and in just 4-weeks the goal is to become a hybrid film photographer. This course is comprised of 12 video training lessons, 12 workbooks, a private Facebook group to collaborate with others in the course, a bonus materials (including resource guides, checklists, additional videos, and more!). This 4-week training course is organized to learn all about the film basics, exposure/meter/lab care, how to combine film and digital, and the editing process. Below is a screenshot sneak peek highlighting the course material that I’ll be learning. I couldn’t be more excited to start this adventure! 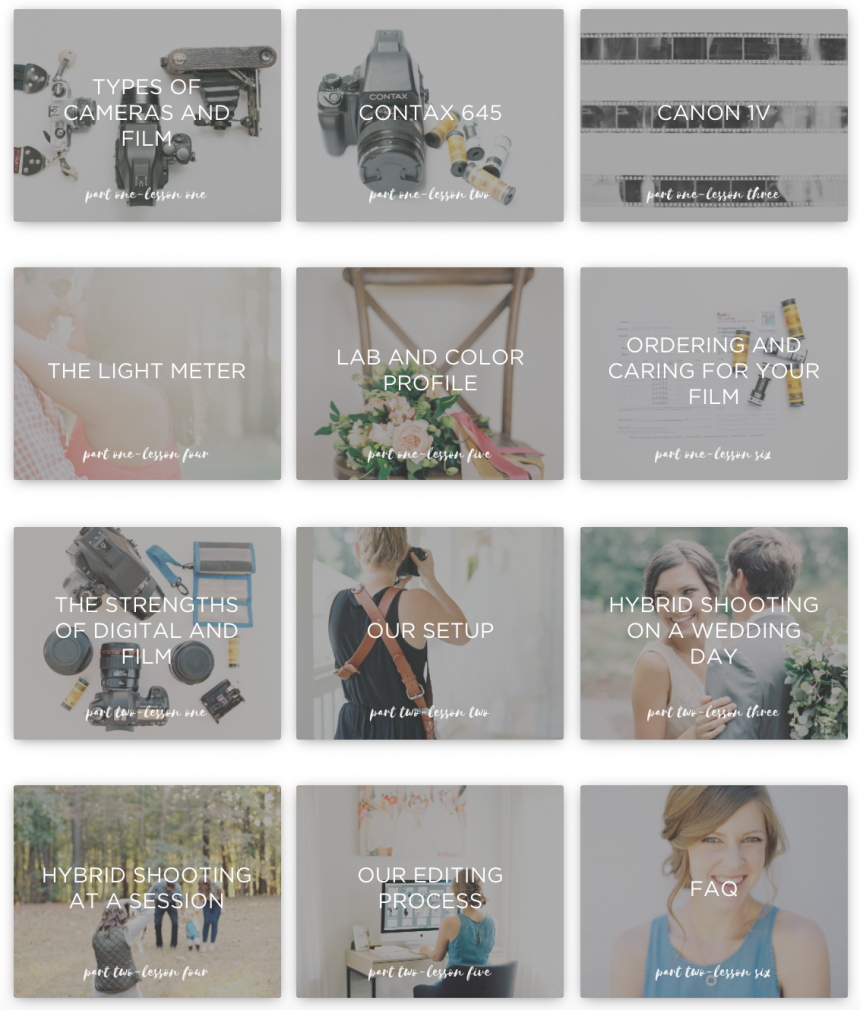