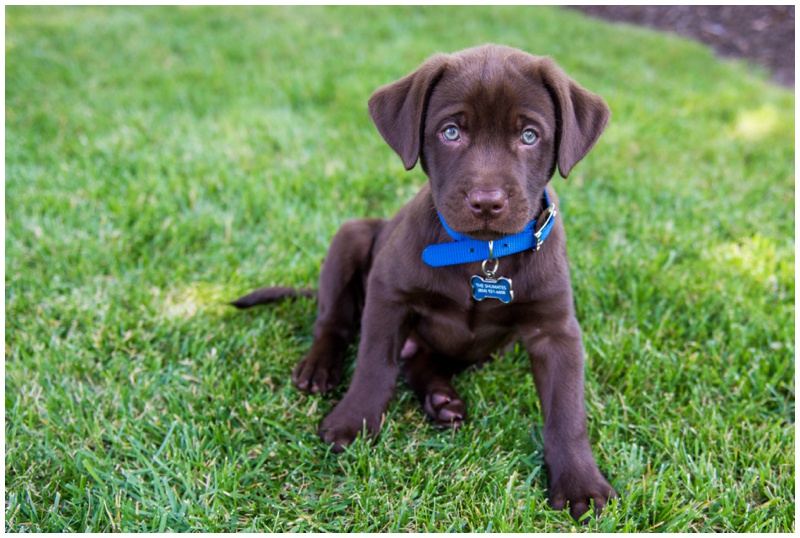 It’s been over 3 months since we’ve had a dog in the house. But it’s been almost 10 years since I’ve had an 8-week old puppy! There’s a difference. As you know, Ryan and I brought our little guy home last Friday. We’ve spent the last few weeks getting the house ready for his arrival… His crate was setup in the family room, a dog bed in our bedroom, the toy basket was out, water/food bowls were ready, and a plastic pool was in the yard. To say we were excited to fill our house back up with a furbaby was an understatement.

We’ve now had Henry for going on 4 days now and we’re completely in love. This past weekend was spent getting him introduced to the house, settling into a routine, and showing him off! He now has the lay of the land and is making himself at home. Yesterday he mastered the stairs… he can go up and down and follows me around everywhere. It wasn’t until last night when I was tidying up the house that I realized… I’ve got my shadow back.

When I go out to get the mail, grab something from the garage, refill the bird-feeder, do the laundry, water the plants… you get the idea… he’s right there by my side…. and it’s been great. It’s what I’ve missed most since we lost our Jackie boy. It’s an amazing feeling those first few days of building trust with man’s best friend.

I’m taking advantage of his 11 pounds of cuteness and bringing him along with me on errands. I have a beach bag that I plopped him into and it’s just big enough for his head to pop out the top. You should’ve seen the other shopper’s reactions… they loved him! This past weekend, we went into Martins, Best Buy, and Home Depot. Ryan and I ventured out twice without Henry to get him used to being on his own. Given the gadget girl that I am, I setup this sweet baby cam so we can watch him while we’re gone (highly recommend the Belkin Netcam!). There is a volume button to hear if he’s barking and a button where I can speak into the webcam speakers — very cool!

So far, it’s going great with Henry! We’ve gotten into a routine of things and he’s almost sleeping through the night (with us, of course!). We crate him when we leave the house and play/snuggle/play/snuggle when we’re home.

It’s been a while since I’ve done a “top ten” blog post! In the spirit of this past weekend, I thought I would post some top ten tips to help prepare you for bringing a puppy home.

Of course, they’re plenty more tips but these are some of the highlights. If you have other fun tips, please comment below! If you’re on the fence about bringing a dog into your family… do it! They are such incredible animals, loyal, loving, playful, and will change your life!

« Welcome Home Henry!Come Together • My Experience »